What are the reasons for the lack of women in top management positions? 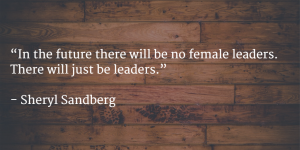 As a woman, I find the question of why we see so few women in top positions both puzzling and interesting. What does it take for women to get to the top of the organizational hierarchy and do women follow a different path than men to get there? Are male and female leaders very different in their approach to leadership and are their qualifications different? Is one sex more fit for leadership than the other is?

My inspiration for looking into these questions is first of all that I am a woman, and a very curious woman! I  would simply like to know more about, why men and women are not equally represented in top management. Maybe there are several good reasons for this?

I got even more interested about looking further into the differences of male and female leaders,  after watching the documentary “Miss Representation”. It is written and directed by Jennifer Siebel Newsom, an American documentary filmmaker and actress, and the theme is “….how mainstream media contribute to the under-representation of women in positions of power and influence in America” (http://therepresentationproject.org/films/miss-representation).

I found the documentary very interesting, because of its focus on women in top management and how it reveals, that the number of women on boards in the American media business is extremely low and it reflects on, why this is a problem.

In Europe, we see the same tendency when it comes to female leaders.  In spite of the fact, that a third of all managerial positions in the EU belong to women, the Financial Times top 500-company list shows, that only 1.8% of CEOs in the EU are women. In the EU, approximately 10% of all board seats are held by women (Ely, Ibarra, & Kolb, 2011, p. 474)[1]. In the US, 2.2% of Fortune-500 companies have female CEOs and about 15% of Fortune-500 companies have women on their board and in corporate officer positions.

These numbers are interesting because statistics show that in Denmark 56%[2] of students accepted into higher education, in 2015, are women. Therefore, there should be a sufficient pool of qualified women to recruit from.Why is it, that so few women reach top management and board positions if they are as well-educated and competent as men?

Another perspective in the debate is that maybe women are just not very interested in a top management position due to the nature of the job and the requirements and demands it holds. The idea that women prioritize their family and opt-out could be an explanation for the low number of women in top management. If that is the reason, then it is by choice that so few women take on these jobs and then there really is no problem to discuss.

However, the different perspectives and questions make you wonder if women are really opting-out to avoid the stress and pressure that comes with a top management position or if the reason is related to gender issues such as stereotyping and the way we view leadership. Maybe most people, for obvious reasons, still view a boss as male and leadership to be a male discipline. Since most top leaders are men, this would make sense. Or maybe women are just not qualified because leadership takes something that most women do not have?

Provocative statement right! Is it true? In my next post, I will try to give you some answers to these questions.